The National Flag of the Republic of Azerbaijan 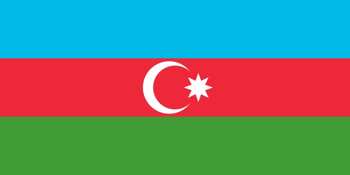 The tricolor state flag in Azerbaijan was adopted on November 9, 1918 by the decision of the government of the Azerbaijan Democratic Republic.  After the collapse of the People's Republic on April 28, 1920 and the establishment of Soviet power, this flag was abandoned in Azerbaijan.

On February 5, 1991, the Supreme Council of the Republic of Azerbaijan considered the petition of the Supreme Assembly of the Nakhchivan Autonomous Republic and decided to adopt the tricolor flag as the state flag of Azerbaijan.

The state flag of the Republic of Azerbaijan consists of three horizontal stripes of the same width.  The top bar is blue, the middle bar is red, and the bottom bar is green.  The blue color indicates that the people of Azerbaijan are of Turkish origin, the red color is the desire to build a modern society, develop democracy, the green color is a sign of belonging to the Islamic civilization.  In the middle of the red stripe on both sides of the flag is an octagonal star with a white crescent.  The ratio of the flag's width to its length is 1: 2.