The National Leader of the Azerbaijani Nation - Heydar Aliyev

A thirty-five-year period in the history of Azerbaijan, which began in the late 1960s and is called the XXI century, is associated with the name of the great leader Heydar Aliyev.

All these years, he has borne the responsibility of Azerbaijan, brought it out of the hardships of history as a state and our people, created an independent country, which we call modern Azerbaijan, its realities today, a reliable foundation for a bright future. During these years, the revival in all spheres of socio-political, socio-economic and cultural life of the Azerbaijani people is associated with his name. The main ideological and political direction of Heydar Aliyev's philosophy of governance, which began in the late 1960s, was characterized by the expansion of all forms and means of national self-expression, the strengthening of national pride and the implementation of a strategy of rapid development. The ideology of Azerbaijanism, founded by Heydar Aliyev at that time, defined the place of Azerbaijan in the modern world, formed the basis of the idea of ​​our national statehood and created a solid foundation for the solidarity of Azerbaijanis around the world. In 1967, he was appointed chairman of the State Security Committee under the Council of Ministers of the Azerbaijan SSR, and in the same year he was promoted to the rank of major general. At the plenum of the Central Committee of the Communist Party of Azerbaijan held on July 14, 1969, Heydar Aliyev was elected First Secretary of the Central Committee of the Communist Party of Azerbaijan. In 1976, Heydar Aliyev was nominated as a member of the Politburo of the Central Committee of the Communist Party of the Soviet Union, and in December 1982, a member of the Politburo, was appointed First Deputy Chairman of the USSR Council of Ministers. During his tenure, Heydar Aliyev led the most important spheres of economic, social and cultural life of the USSR.  In connection with the bloody tragedy committed by Soviet troops in Baku on the night of January 19-20, 1990, Heydar Aliyev made a statement at the Azerbaijani representation in Moscow on January 21, demanding the punishment of the organizers and perpetrators of the crime against the Azerbaijani people. He left the Communist Party of the Soviet Union in July 1991 in protest of the hypocritical policy of the USSR leadership over the acute conflict in Nagorno-Karabakh.

Heydar Aliyev was awarded the Order of Lenin of the former USSR five times, the Order of the Red Star and numerous medals, twice the title of Hero of Socialist Labor, as well as the highest awards of various countries, honorary titles of prestigious universities. 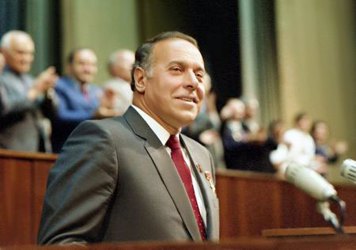 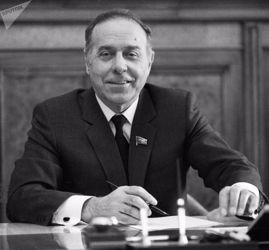 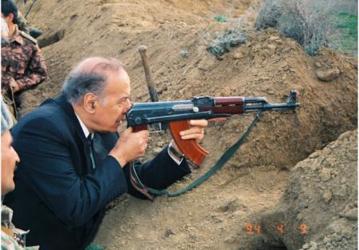